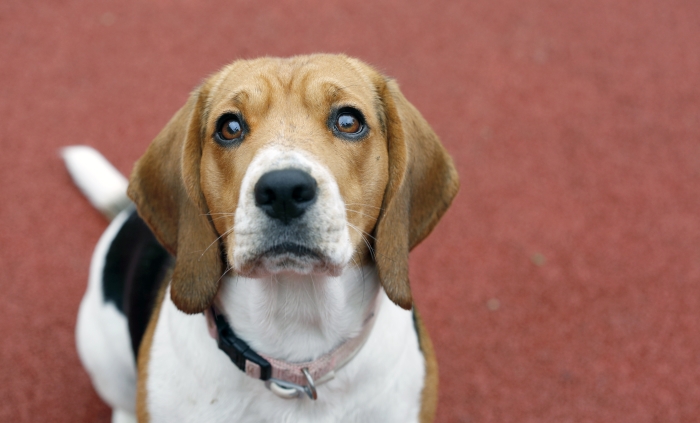 When it comes to dog training there’s no doubt that we learn a lot of valuable information from “do this to achieve this” articles, but there’s also value in learning from mistakes.

Anyone that’s worked closely with their dog knows that dog training doesn’t always go as planned, and the expected results obtained aren’t guaranteed.

I certainly have plenty of “that didn’t go as planned” and “why didn’t I realize this before?” moments, so I wanted to take a few minutes to share a few of them. Here’s 5 dog training lessons I learned the hard way.

Saying that Laika was a challenge when it comes to teaching bite inhibition is a lie. She wasn’t just a challenge, she was a nightmare. I had huge scratches up and down my arms and legs, to the point where I started wearing long sleeves and pants in the summer just to avoid all the “oh my gosh what happened to you” questions.

I don’t know why it was so bad, I just know it was bad. So I immediately read every single thing that I could find about stopping your puppy from biting. And one method that popped up regularly was the “yelp method.” Every time your puppy bites you you’re supposed to let out a yelp, and in turn your dog will stop biting because they’ll realize that they’re hurting you. You know what happened when I tried that? She bit harder.

And silly me just figured I was doing something wrong, so I kept at it. Every time she bit down on me I’d yelp, and every time I yelped she’d bite harder. Figuring that my yelps weren’t convincing enough I kept practicing. Eventually I’d let out a realistic yelp that would get through to her, right? No luck, she kept biting.

Turns out the yelping method doesn’t always go as planned. Some dogs get more riled up and excited as soon as their owner starts making funny noises, and Laika was no exception. Looking back it should have been obvious; making strange noises might make puppies even more excited and nippy? Who knew? Well I didn’t, and since I read about it on the internet I just knew it had to be true.

Eventually I got smart to the whole scheme and moved on to different methods. As soon as I moved onto the redirection method I let out a huge sigh of relief. I’d finally found something that actually worked. Turns out that getting your dog’s attention onto a toy rather than your bare arm works pretty well when teaching your dog to “bite this and not that.”

Training Is About More Than Just Tricks

I’ve been obsessed with dogs for a long time, and growing up I got my hands on every dog related thing I could find (this was before the internet). That included a lot of books, and some of those were all about dog training. They taught you how to potty train your dog, how to teach them to “come here,” and how to do a few basic tricks like sit, lie down and stay. What they didn’t do is go beyond the basics.

So as I got older and started reading more and more I was astonished to find out about things like impulse control, loose leash manners and the importance of play. The books I’d been reading didn’t touch on behavior related topics, so growing up I was under the impression that most of the way a dog behaved was just due to their personality rather than anything related to training (or lack thereof).

So if my dog was being pushy or impatient I just chalked it up to their personality. I didn’t think “oh well he could probably use some impulse control training,” I just thought “oh he just knocks people over because he’s young and doesn’t know any better.” Well looking back it’s obvious that he didn’t know any better because I didn’t bother teaching him how to appropriately greet visitors.

I figured that my neighbors dog who barked all day long and growled anytime someone approached was just mean; things like “he’s probably frustrated from being chained up all day long and not used to dealing with new people” didn’t cross my mind. As sad as that may be that’s how I thought, and that’s how a lot of us thought not so long ago. There wasn’t much emphasis on the correlation between training and behavior; it was all reactionary.

Not All Dogs Are Highly Food/Treat Driven

If you told me 10 years ago that there are dogs in this world who spit out meat because they’re more interested in something else I would have called you a liar. What sort of dog spits out food, let alone meat? Well, Laika does for one.

I found that out a few years back when trying to manage her reactivity on walks. If you’ve ever worked with a reactive dog you’re probably familiar with their threshhold i.e. the point at which they get too worked up to concentrate. When you go over that threshhold it’s nearly impossible to get your dog’s attention back, even if you’re handing out meat. Now dealing with reactivity is an extreme example, because if your dog is too excited by something nearby there’s no amount of meat that will get their attention back.

But what was interesting to me was that food doesn’t hold Laika’s attention on walks, even when there’s nothing exciting in sight. If I hand her a piece of food while we’re walking there’s a 75% chance she’ll spit it right back out. She just doesn’t care that much for food, even if it’s meat. She’ll go through the action of taking it, but she’ll immediately spit it out and move on. Yeah, dogs like that exist and Laika is one of them.

Now if I hand her a treat while we’re inside she’ll eat it, but she doesn’t get very excited about it unless I really talk it up first. And 9 times out of 10 after handing her that treat she follows up by grabbing the nearest toy dropping it at my feet. Turns out not all dogs are highly motivated by food; some really do prefer play.

So I started using her love of play when training. Rather than just using treats all the time I started bringing her tug toy along on walks. And guess what? It works pretty damn well. Turns out my dog isn’t that into meat, but she’ll do nearly anything for a game of tug.

The Environment Makes a Huge Difference

Saying it out loud is embarrassing now, but I’ll admit it; I didn’t realize that where you’re at when working with your dog makes a huge difference. I pretty much thought “my dog knows this, so she’ll do it anywhere.” End of story. Sounds simple, right?

Well as it turns out trying to hold your dog’s attention when there’s 17 squirrels running around is easier said than done. And trying to get your dog to do all their fancy new tricks in front of 15 people is harder than doing it when you’re alone in the living room.

The most obvious example of environment making a big difference is what happens when we try to teach out dogs a reliable recall. After working with our dogs on the “come here” command indoors to much success we head outside. And guess what tends to happen? They don’t “come here” when it’s time to go back inside. It’s not that they don’t remember what come here means, it’s that they might just prefer not to.

If you think about it from your dog’s perspective it makes sense. For Laika the decision was; A.) would I rather stay outside chasing squirrels, or B.) do I want to go back inside where there’s nothing fun to chase? Not surprisingly option A would win. I struggled with this for a long time, until I learned to start making option B more enticing.

Rather than making option B less fun by yelling “come here” in an angry tone 100 times I opted to make option B the best one available. I paired it with all sorts of fun things like a game of tug or find the treats. To override my dog’s excitement about the environment I started working on making myself more fun and exciting than those stupid squirrels. I rewarded her well every time she chose option B, and it didn’t take long for her to realize that come here doesn’t just mean having to come inside and be bored; it means we’ll get to do something just as fun as chasing squirrels.

Are you familiar with the “Be a tree” method? It’s when you stop every time your dog starts to pull on the leash. It’s supposed to teach your dog that “when I pull we stop, therefore I will stop pulling to prevent all that stopping.”

Do you know how many times I tried to be a tree on walks with Laika? 1329, well that’s where I lost count at least. And do you know how she reacted? She kept pulling and whining the whole time, occasionally looking back at me like “What are you doing crazy woman? You know this isn’t how walks work.” I paired it with treats and it didn’t get any better.

I did this for months. Every time she’d pull I’d stop, and even if I got her to stop for a moment the very next step she’d start pulling again. It didn’t work, and from what I’ve been seeing it doesn’t seem to work for a lot of dogs when used alone. After a while it improved Laika’s ability to stand still while on a walk, but it didn’t do anything for the ridiculous amount of pulling she’d do as soon as we started walking again.

If your dog has been pulling for years it’s a hard habit to break; and you’re probably going to need to add in some additional methods such as switching directions to make it stop. Rather than just stopping to be a tree try changing directions. Pair that with some yummy treats to keep their attention and encourage them to stop pulling and follow you around.

What Dog Training Lessons Did You Learn The Hard Way?

So those are some of the dog training lessons I learned the hard way, what about yours? Did you try certain methods that just didn’t work for your dog?