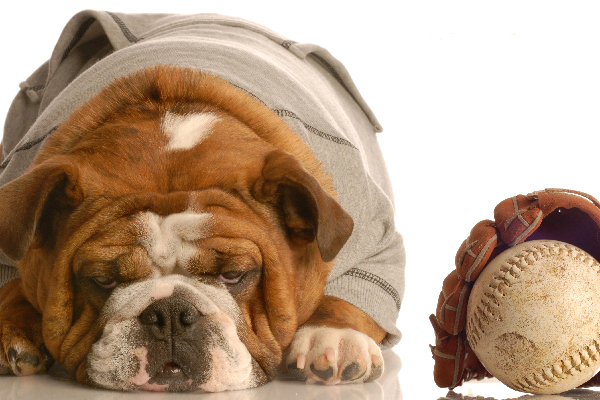 Baseball season is almost here (Opening Day is March 29) and besides the hot beef franks that fans run to get between innings, dogs aren’t exactly a big part of America’s Pastime. Pups are rarely let on the infield for obvious reasons, but that doesn’t stop some MLB All Stars from prioritizing post-game snuggle sessions.

My wife, my family, my friends make today special!! #MerryChristmas!!

//www.instagram.com/embed.js
Many say Mike Trout is the best player in baseball today. The six-time MLB All Star has won the NL MVP Award twice, but The Most Valuable Pup of his online presence is a sweet Alaskan Husky. You can find Juneau just hanging out, cheering on dad and the Angels, or giving sloppy kisses on Trout’s Instagram handle, @miketrout. It’s #adorable.

Few pets have stirred up more speculation in sports than Washington Nationals’ right fielder Bryce Harper’s dog. When one of the best young talents in baseball adores a pet that’s named after where the Chicago Cubs play their home games, people are going to talk. Thankfully, his pup Wrigley is calm under pressure from the media.

#happynationalpuppyday everyone!! Astros favorite day of the year

//www.instagram.com/embed.js
This Boston Red Sox pitcher’s French Bulldog is almost as famous as he is! Price’s pup Astro has over 5k Twitter followers and even had a bobble-head day dedicated to him at Fenway Park. With frequent photoshoots and more fans than most people, is it really a surprise that the one-time highest paid pitcher in baseball has turned his best buddy into a brand?

Last fall, LA Dodgers right-fielder Yasiel Puig played in game 7 of the World Series only to return to a robbery and discover that his dogs that were left to escape from his property. After a gut-wrenching loss in both the big game and the burglary, he was thankful for friendly neighbors that found his German Shepherd Dogs and returned them.

//www.instagram.com/embed.js
If you didn’t already love Kate Upton for her cover-girl looks, how she turned her hard-throwing husband into a dog-lover will have you joining the fan club. Now a dog dad through marriage, Houston Astros pitcher Justin Verlander has both a supermodel for a wife and Harley, a pet product spokes-pup, as a best furrend. Not bad for a kid from Virginia!

Okay, so Baltimore Orioles pitcher Alex Cobb has never actually played in Major League Baseball’s summer classic, but the adoption story of his dog Oscar is All-Star caliber. In 2015, he found a stray outside of the Tampa Bay Ray’s training facility. After learning the dog was abandoned, he decided to keep the Baxter from Anchorman-lookalike as a brother for his American Bulldog. Now that’s classy!