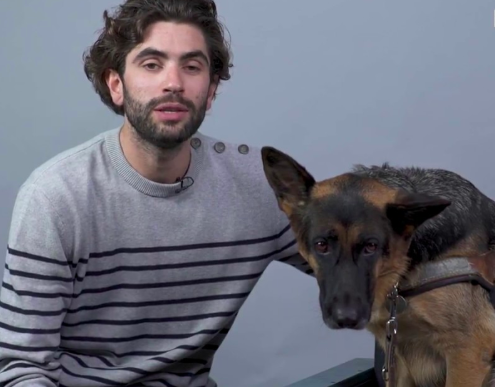 One person who is blind is expelled for bad manners supermarket for being accompanied by his guide dog .

The facts that, at first sight, may seem like a joke in bad taste, happened last Friday, September 27 at a well-known supermarket of Marseille (south of France). Arthur Aumoite that is the name of the person affected by this event, went to make his purchases accompanied by Loya, his guide dog . So far everything is normal since everyone understands – or should – that a blind can not go alone on the street for their safety.

The altercation began at the same moment in which a security guard of super le prohibited entry to the establishment with his can claiming that in the Monoprix (that is the name of the supermarket) pets are not allowed for reasons of hygiene. How?! Yes Yes. You can check it in the next video!

In a matter of seconds and thanks to the technologies that accompany us every day, this pathetic discrimination scene was immortalized in video published on social networks and broadcast on the French news channel, France Info. After the scandal there were many people who showed their support to Arthur and the French press was made echo of this painful news with the aim of making us a little more aware of all this type of intolerable cases.

For its part, the establishment (Monoprix) has apologized for what happened using its account. Twitter “We apologize for this incident, in the same way that the store manager did in person with the young man. For sanitary reasons, animals can not enter stores, except for guide dogs “. These were the words the company wrote in apology.

However, Arthur is clear about it because he does not want anyone to go through the same situation as him. The owner of Loya spoke with an RTL journalist to inform him of his intention to denounce the company since in France there is a law that allows access to all public places with guide dogs without distinction .