There are a few things about cucumbers you might be surprised to learn: 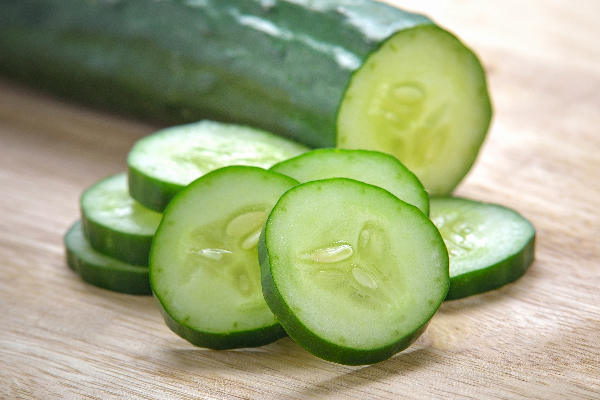 To best answer the question, Can dogs eat cucumbers? we turned to a vet.

“Cucumbers aren’t toxic to dogs, so if cucumber-loving owners want to share this low-fat snack with their pup, I give them a thumbs up!” advises Heather B. Loenser, DVM Senior Veterinary Officer for the American Animal Hospital Association (AAHA).

Are cucumbers good for dogs?

The next question after answering Can dogs eat cucumbers? is: Are cucumbers good for dogs?

Great news! It turns out that cucumbers are a very healthy snack for both people and dogs. Cucumbers are a great low-fat, low-calorie treat that is especially good if you are concerned about your dog’s weight. Cucumbers are high in phytonutrients and have antioxidant and anti-inflammatory benefits.

What types of cucumbers can dogs eat?

Can dogs eat cucumbers is sort of a trick question. There different kinds of cucumbers, and you should not share some types of cucumbers with dogs:

How should you serve cucumbers to your dogs?

Cucumbers are a very watery vegetable, so they’re a great way to provide your dog with extra boost of hydration — especially during the summer months. If your dogs (and you!) are active, cucumbers are easy to slice and carry with you on hikes or trips to the beach.

In fact, I’ve already planted a lot of cucumber seeds to be sure I have enough for my salads and my dogs to snack on all summer long. Last year, my big dogs liked cucumbers so much that they even tried to pick them off the vine!

Sassafras Lowrey is an award-winning author. Her novels have been honored by organizations ranging from the Lambda Literary Foundation to the American Library Association. Sassafras is a Certified Trick Dog Instructor and assists with dog agility classes. Sassafras lives and writes in Brooklyn with her partner, a senior Chihuahua mix, a rescued Shepherd mix and a Newfoundland puppy, along with two bossy cats and a semi-feral kitten. Learn more at sassafraslowrey.com.

Get more answers to “Can Dogs Eat” on Dogster.com:

The post Can Dogs Eat Cucumbers? appeared first on Dogster.