Can dogs eat olive oil? And is olive oil good for dogs? Olive oil, that staple of every kitchen, happens to make an excellent, healthful addition to every dog’s food bowl — among other benefits. We’ve touted the benefits of coconut oil before, which is another mainstay in my pantry, but let’s not forget the oil that comes from olives, which has its own fantastic advantages. In fact, why not mix things up? Rotate the oils you sweeten your dog’s food bowl with! I like to switch among olive, coconut and (for the omega-3 factor so key to senior dog vitality) fish oil by Nordic Naturals. Here are eight reasons to heart olive oil for dogs. Bone appetit! 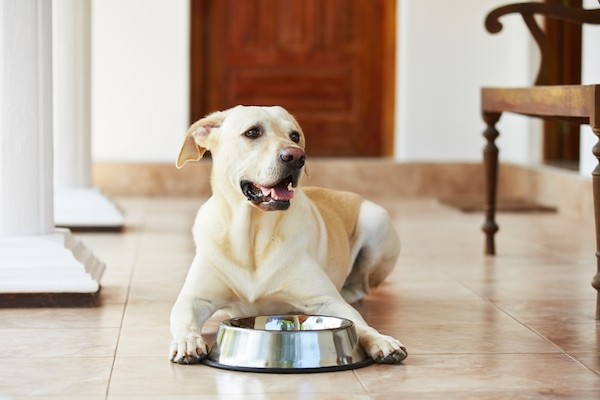 Can dogs have olive oil and is olive oil good for dogs? Photography by Jaromir Chalabala / Shutterstock.

Few things perk up a boring bowl of dry kibble better than a spoonful of what dog-loving celebrity chef Rachael Ray affectionately calls EVOO (extra-virgin olive oil) — especially if your kibble might be, ahem, the tiniest bit stale. Add a dash of cinnamon and turmeric, and you’ve spiced your dog’s meal in grand style!

Whether the portly pepperpot is canine or human, if there are some unwanted pounds that need shedding, olive oil for dogs helps grease the weight-loss engine. The monounsaturated fats in olive oil actually encourage pound-melting by breaking down the fat inside fat cells, getting rid of belly fat and reducing insulin sensitivity.

Rich in monounsaturated fats, olive oil prevents and lessens the effects of cardiovascular disease and diabetes. It contains oleic acid, in addition to some compounds (squalene and terpenoids) that are believed to be effective in preventing cancer, which kills a staggering 50 percent of dogs over age 10.

With high levels of antioxidants — including polyphenols, vitamin E, chlorophyll, and carotenoids — olive oil is very effective at arming the body’s immune system so it can efficiently fight off disease. That’s especially important as we (humans as well as canines) transition from one season to another.

Dogs don’t live nearly as long as we want them to, but nothing looks sadder than a young dog going gray before his time. Olive oil for dogs prevents free radical cell oxidation (see above), which can lead to premature aging, so it works to help keep your dog looking as vibrantly youthful as he did in his salad days.

Olive oil helps prevent the cognitive decline associated with aging in all species, so be sure to serve it to senior dogs at least once daily, to keep their minds beautiful and cloud-free. This is especially important if your dog is a super-smartie, such as a Border Collie, Poodle, or Mensa mutt.

7. Olive oil provides an energy boost to your dog

Circulation improves and breathing comes more easily with a daily dose of olive oil — it helps increase blood flow and, in humans, lessens the effects of asthma. So, by extension, it can be a dogsend for brachycephalic breeds such as the Bulldog, who sometimes struggle to breathe.

8. Olive oil for dogs is a beauty treatment, too

There’s more to olive oil than mere substance — it’s a style statement, too! Long used to beautify human hair and skin, olive oil for dogs can do the same. Condition your dog’s coat from the inside out with a daily serving, which helps to impart moisture and gleam to even the driest, dullest fur.

Tell us: What do you think of olive oil for dogs? Do you add it to your dog’s diet or beauty routine? Did we convince you to start? Let us know in the comments!

Learn more about homemade remedies for dogs on Dogster.com:

The post Olive Oil for Dogs — 8 Reasons to Add It to Your Dog’s Diet appeared first on Dogster.