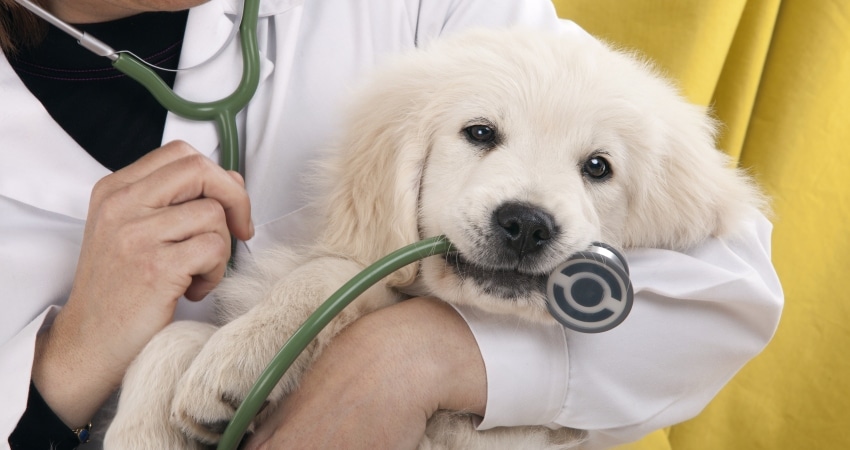 A puppy in the arms of a veterinarian. / Roger Costa Morera

"What happens to your dog? "," How much time do you have? "," Is it male or female? "are some of the questions you will hear, or will ask, in the veterinarian's waiting room. The dog or cat on duty catches you with your eyes. And what can begin only as a question about education with your human, ends with curious conversations while you wait at the vet .

The funny thing is that the scene resembles quite a room waiting for the pediatrician: children with their parents, dogs or cats with their humans. The situation is quite similar. In each chair is each with his pet. Another person arrives: "who is the last?" and asks for the time. When the fuss among the dogs calms a little -each time a new one enters the door, the festival of sniffing begins, barks or feints from them-, check out the ones in the room : puppies dispelled, adults, smaller with divine jackets, bigger with a beautiful bearing, of race like the German shepherds, crosses the sea of ​​affectionate ones, … And the questions to know what happens to each other come almost from run.

"Is your dog male or female?"

Dogs, for example, are a very intelligent species and they know very well when they go to the vet. If you are not used to going elsewhere, beyond the daily walks, you probably have a car trip with the vet. Many often get very nervous, especially once they enter the clinic. It is seen that for them it gives off that smell with which they identify the gentleman or lady in the white coat . The whining, the half-barking, and the nervousness to get out of there soon appear. And that's another conversation: "why are you so nervous?"; "The last time we came did …" will be some of the answers.

A cat inside his carrier in the waiting room of the veterinarian: / LOLA DUARTE

And at "what's wrong with him?" ailments of all colors come out. The inmates range from a simple cold or pharyngitis to more serious diseases that attack vital organs such as the kidneys. Even cancer. The last time I went to Chufa, a girl came with a dog who found him near his house: with hardly any hair, on his bones, with his ears eaten by the ticks. Although it improves physically, on the inside the analytical results are negative. Luckily for him on his way he crossed paths with this woman. Few are able to pick up a street dog and take care of veterinary expenses to help them.

Urgencies or visits of rigor

In other cases it is evident that it is something physical. That day I also entered an American Staffordshire, held in his arms by his owner, with his jaw unhinged. The faces that were left to the staff that we expected to see that … we all thought that I would have gotten into a fight or similar. Or the stitches in the eyes of a sharpei. It is a very delicate breed and due to its wrinkles, which cover the snout and eyes, they need several operations throughout their lives so that it does not suppose a problem.

Or simply you have to give the vaccine of turn to your dog or cat that is like a rose. Be that as it may, who likes to go to the doctor? Nobody, because your pet does not like the vet either. That's why when you leave the clinic they are shot . They need to talk and say: "Thanks for getting me out of here, human! Do not bring me anymore, okay? ".

Read also: Sarro in dogs and cats: how to avoid a worrisome disease in your teeth