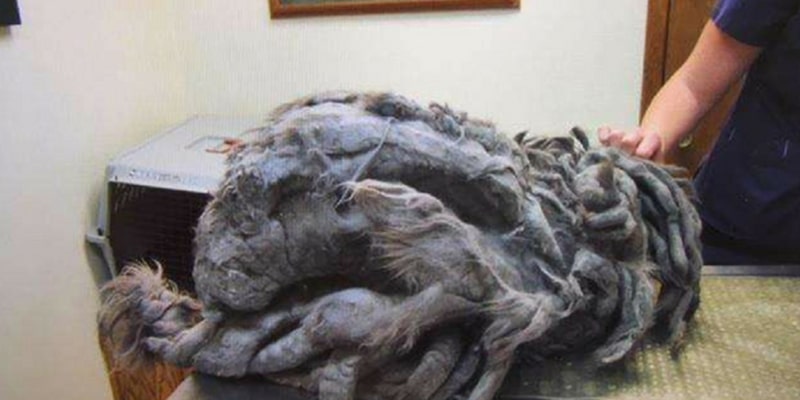 The abandoned cat in Nevada

Do not miss this extraordinary case of a cat that appeared at the gates of an animal protector in the United States, whose appearance you can not believe.

It is common for animal protectors to find cages at their doors where many people leave animals for different reasons. In Wamiz we are radically against this practice but what happened in a shelter in Nevada, in the United States, has exceeded all our expectations and has plunged us into deep disgust. The images are overwhelming, since what they found inside the caregivers, was far from looking like an animal. We tell you everything below and we show you all the images.

The moment the animal was abandoned. The appearance of the cat on arrival. It did not look like a cat. The cat was overweight.

As you can see on these lines, the animal appeared in the shelter with a huge mass of hair and it was impossible to appreciate the shapes of his body. This was a real shock to the workers of the Douglas County Animal Care & Service, who soon set to work. At first they thought that it was a dog, but little by little they discovered that in fact it was an adorable kitten, which was really in need of affection. Liz Begovich, shelter supervisor said she had never seen an animal in that state: "I had never seen a cat in that state. In general, when someone leaves an animal at the door, outside opening hours and without giving any explanation, it is not a good Samaritan. Who is capable of doing something like this is because something is hidden. There could be other animals in a similar state ".

Nevada police have been warned of this fact and investigations are already underway. The cat was removed a total of 4.5 kilos of hair and, although he suffers from obvious overweight, the animal felt much more relieved. It's about ten years old and has already been put up for adoption on the US shelter website. He has been baptized with the funny name of Bob Marley and his quality of life has improved considerably.

Read also: 10 tips to adapt your home to a gato!