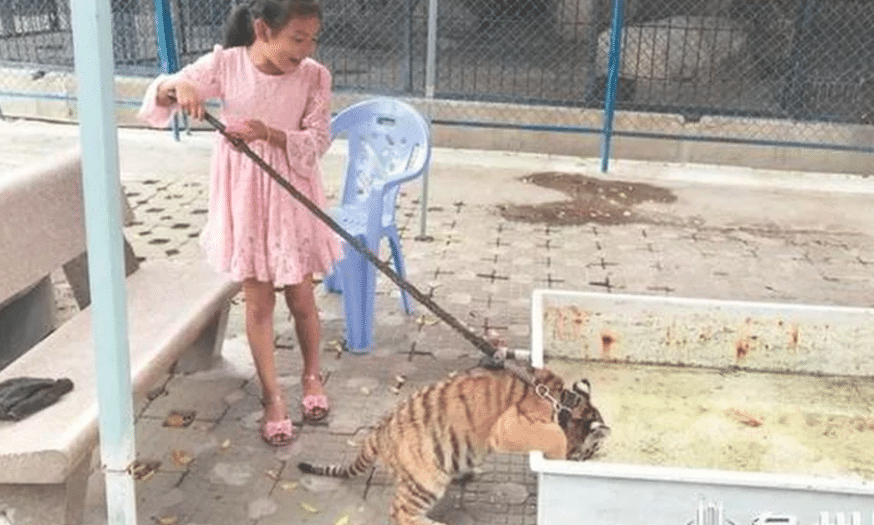 How can someone have a tiger as a pet? I South China Morning Post

Inadmissible! A Chinese girl presumes on social networks to have a baby tiger as a pet . We are very angry!

There are moments in life in which it is worthwhile to reflect and, one of them is this! Social networks usually show us moving stories but, sometimes, the ingenuity of people is able to leave us with the open mouth (for bad). A feasible example is found in China where a girl -with the permission of her parents- has decided to have a baby tiger as a pet . What?! As we tell you, it is happening. We are speechless because, in our view, wild animals must be at liberty !

It all started on a normal day in which Sun Xiaojing started playing ( as if this were normal) with a newborn baby tiger. Surely this assumption seems odd, however if your dad is one of the zookeepers where the animal was found … the story takes a creepy sense ! However, when the girl's father tells the media how his daughter's relationship with the little tiger is, our hair stands on end.

"It's been three months since my daughter milk, bathe and play with it "says Sun's father in the South China Morning Post. To which he adds: "they have become inseparable and Sun has baptized her as Huniu, which means tiger girl". Before these statements, what should we do? Sincerely, we do not know whether to laugh or cry because if for the little one it is dangerous to have a tiger as a pet for a wild animal by nature it is not pleasant to have to endure certain things. Maybe these words sound a little harsh, however they come out of our hearts. Each species has the right to live as ordered by the cycle of life and humans must never impose the opposite. We assume that, in this case, Sun's family has not seen The Lion King to educate his daughter about certain issues.

Not content to brag about the feat, the father of the daughter is surprised by the reaction of other parents. "My daughter's friends and their parents think that tigers are scary but Huniu just wants to have friends" . (Sir, it is you who is terrifying.) Likewise, Sun's dad comments that the tiger is delighted because he loves to play and to be caressed in the belly. Please, there's no need to kidnap a tiger for that. Adopting a cat is more than enough!

However, the chronicle becomes really interesting when we hear Sun's father assure that the next month when the teeth of the tiger harden (currently the beautiful animal as 2 kilos of meat at day) will put him in a cage and will not let him out through the security of both his daughter and the zoo visitors, although for now the man enjoys watching the tiger baby run to the arms of her daughter when she returns from school. Of crazy!

Sun -according to the statements of his father- will suffer a lot when he sees his pet tied, but (with forgiveness and without hurting the feelings of the little one) we already break our hearts reading this history since no one should have a tiger as a pet because it is nice, adorable and cuddly. These animals do not stop being wild and their place is neither in a cage nor in a zoo. They must be in the jungle!

Read also: Raccoon as a pet? 10 reasons why you should never have one