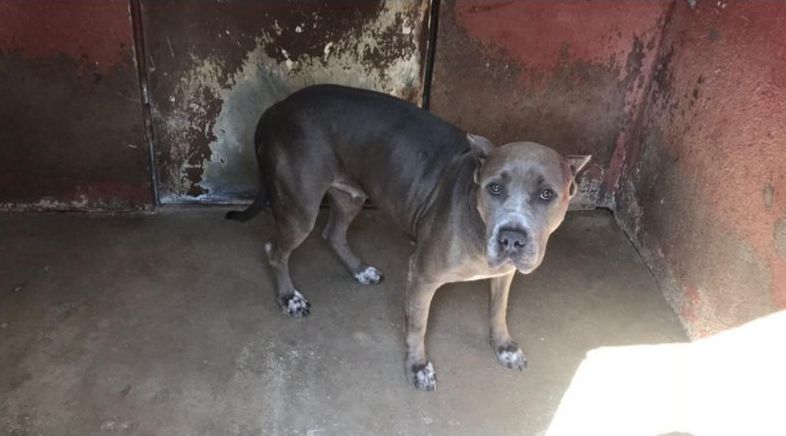 Kiara, in the protective where it is since the event. / PHOTO: L'Última Llar

A few weeks ago the social networks applauded this bitch who took a bite of the penis to the man who hit him on the street. Since then remains in the kennel where it is endangered

Last September 11 a bitch was news for tear the penis of a man who hit him in the street. Then the controversy did not leave the situation too clear: there was talk of a dog and it turns out that it is a female; there was talk of an attack by the man and it seems that the victim was this … Whatever it was at that time the social networks were overturned with Kiara, this is the name of the animal, to hit back the human who hit him. Since then this bitch remains in a kennel where it seems to be in danger.

The neighbor who witnessed the scene said at the time that the man mistreated Kiara in the middle of the street. He said he would have kicked the dog and she responded by biting him in the limb and in his hand. The bite pierced the pants, it tore the skin of the penis and it caused wounds in the glans and in the prepuce.

The man, who needed surgery, also gave his version. He said he was on his way to his home in Reus and crossed paths with a couple who were walking with this dog. Kiara, American staffordshire breed, without leash or muzzle. According to the man, the dog suddenly crossed and went straight to him with "Aggressive attitude" The couple tried to calm their pet without success as it ended up biting between their legs.

Kiara, in a cage

After the event, Kiara remains in a cage in the animal shelter of Reus, in Last Llar. The dog, whose breed is classified as potentially dangerous, has already passed the mandatory quarantine by which it had to pass after the accident. In theory it would have to be there until the judge decides what to do with it. Apparently, the first days the owners tried to recover it, but they did not achieve it because they did not have the necessary license to have a PPP (potentially dangerous dog).

Kiara inside his cage in the protective of Reus.

According to Diari of Tarragona, the NGO Nova Eucària intends to take over Kiara because, she says, the custody of the protector is deficient. Affirm that they take care of the animal and that, moreover, he is innocent of attacking this man whose identity no more data have been provided.

When the news jumped, social networks applauded Kiara's behavior. "Karma or animal justice?"; "This one is not going to kick any more dogs"; "Good for the dog. You have to give the puppy a medal "; "Take it now! If the abusers always got this answer, they would think twice", were some of the comments circulating on Twitter. Now it seems that Kiara had fallen into oblivion.

The City Council of Reus says that to date nobody has presented the necessary documentation to take care of it. That translates into the required license, a special authorization and a census of the animal. If this does not occur before the deadline comes to an end, for the purposes of the law Kiara will be considered officially abandoned. Therefore, it will remain in the hands of the Protector of Reus the possibility of handing it over to the person who presents the documentation for the possession of potentially dangerous dogs.

Also read: Are watchdog or guard dog races more aggressive than the rest?