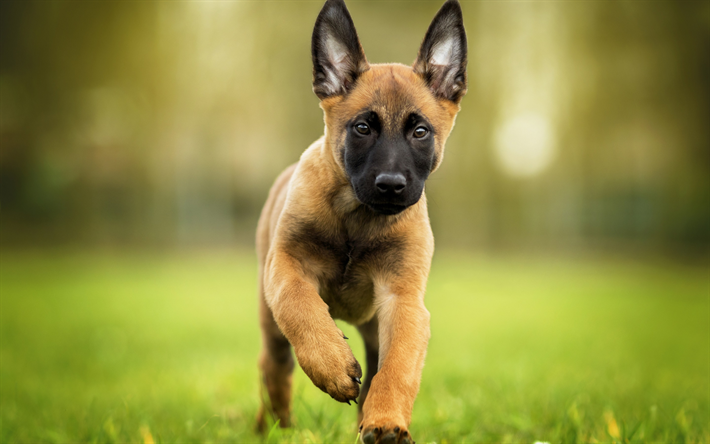 The Belgian Shepherd Malinois and the PPP laws

Following the unfortunate accident in which an 18-day-old baby died on October 3, the Belgian Shepherd Malinois is on everyone’s lips …

Let’s talk of the original malinois …

The Malinois was recognized as a breed in 1909 at which time it was known as an excellent grazing dog ( sheep mainly). We can say that the Malinois was for France and Belgium what the Border Collie in England, Scotland …

But like the Border Collie, the Malinois is a race with a natural aptitude very superior to those of other races, which allows to extend its tasks practically to any field. The Malinois is the quintessential utility dog ​​.

Aware of this versatility and health problems that hurt the German shepherd in the second half In the twentieth century, the Malinois was gaining popularity in police units across Europe. Other breeds were tested, such as giant Schchnauzer, Rottweiler, Doberman …

But no other breed can be so versatile as to work with the same intensity and efficiency as the Malinois.

At the same time, sports with dogs were going popularizing: French ring, mondioring, KNPV, NVBK, IPO … All of them very complete sports – although with different regulations – in which the dogs must overcome obedience, agility and protection tests.

The breeders were selecting dogs more powerful and “hard” (especially in the Belgian lines), and not so much in the French lines.

In some cases they even introduced crosses with prey dogs trying to look for something similar to the “super-malinois”, because we do not forget that it is (or should be) a dog of medium size, around 30-35 kilos.

And the big problem came: On the one hand the Malinois was no longer the shepherd of sheep that was and on the other a halo of super dog surrounded him ( some movies have a lot to do, TV reports with rescue dogs, detectors, but also that dog that collaborated in the capture of Bin Laden) that for the last 10 years has been harming him (and what remains) to turn him into one of the most desired, acquired, and abandoned breeds in the world .

The problems of the super dogs

The malinois is not a dog meant to be a pet. It has never been and now perhaps even less. It is a dog that has been selected to be brave, training, tireless, versatile … And that is a problem in inexperienced hands.

It is something very similar to what happens with gifted children, who tend to be the most school failure accumulate and more headaches suppose their parents … If they are not well channeled, of course.

The channeling of energy

The current malinois does not work 12 hours at day moving sheep, and is still (or now even more) an extraordinarily active and complete dog, but that implies that not all (or rather, very few) guides are at its height . Belgian shepherd malinois needs a training in obedience serious, work at least three days in the week, and a stimulation daily that is not comparable with any other race. Are you going to comply? If not, you will have problems, which in the best case will be destroyed sofas, and in the worst stereotypies, hyperactivity, reactivity or aggressiveness.

So is it an aggressive dog?

No, no is. No dog is “aggressive” because it belongs to one or another race. But the malinois is a dog difficult to satisfy in its instincts .

And if any dog ​​doing nothing is a potential problem in the malinois that becomes “doing something else” by our part than with any other dog.

Speaking e PPP, for example, in the United States, the list of PPP’ s is this:

(Some breeds are repeated for easy identification)

And does this mean that the malinois is a dangerous dog?

No, but it is a dog potentially dangerous by their physical abilities (like any dog ​​over 20 kilos on the other hand), but also is a particularly sensitive dog in the deal, which can lead him to show behavioral imbalances relatively often.

There is no denying that the Belgian Malinois is a powerful dog breed. Standing at 24 inches tall and weighing in at up to 75 pounds, these dogs are certainly not to be underestimated. But what about their reputation? Are they as dangerous as some people make them out to be?

The truth is, any dog has the potential to be dangerous if they are not properly trained and socialized. This is especially true of larger breeds like the Belgian Malinois. Without the right training, these dogs can become aggressive and even violent.

So, if you’re considering bringing a Belgian Malinois into your home, it’s important to be prepared to commit to training them properly. With the right training, however, these dogs can be loyal and loving companions. Just remember, they are not a breed for everyone.

There is no simple answer to the question “Are Malinois dogs dangerous?” Some people believe that any dog has the potential to be dangerous, while others may feel that certain breeds are more likely to cause harm. Ultimately, it is important to remember that each dog is an individual and should be treated as such. While some Malinois dogs may be more aggressive than others, it is important to socialize and train them properly to help reduce the risk of aggression. With that said, Malinois dogs can make great companions for those who are willing to put in the time and effort required to care for them.

Malinois Deadly is a new threat to public safety. This dangerous dog has been responsible for several attacks on people and animals in the United States. The Malinois Deadly is a large, aggressive dog that can reach speeds of up to 30 miles per hour. This dog is also known to be very intelligent and cunning, making it difficult for law enforcement to capture. If you see a Malinois Deadly, do not approach it and call 911 immediately.

Is Belgian Malinois dangerous? This is a difficult question to answer definitively, as all dogs can potentially be dangerous if they are not properly trained and socialized. However, some people believe that Belgian Malinois are more likely to be aggressive than other breeds, due to their high energy levels and intense working drive. If you are considering owning a Belgian Malinois, it is important to research and ensure you are prepared to handle an active and potentially aggressive dog.

Yes, the Malinois is not a dangerous dog. They are known for being loyal and protective of their family and home. They are also intelligent and trainable, making them great pets for active families. However, like all dogs, they need proper socialization and training to prevent potential aggression.