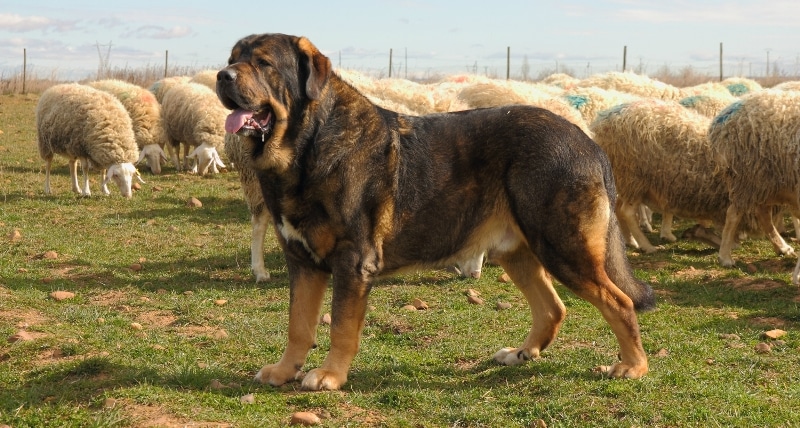 So big in size with immense heart.

Being one of the most autochthonous races, nobody remembers them. Condemned to live in solitude in the rural world, they are always the last to be adopted in shelters. Here we encourage you to make room in your home for one of these wonderful animals.

For being a large breed, for being esteemed as "dogs of and for the field" and also, and sadly, for not being (or having never been) one of the fashionable breeds, the mastiffs are the forgotten seniors. Perhaps along with the mestizos, or even more so than these, nobody notices them when they think of adopting a partner.

And the oblivion they suffer is not only attributable to their great size, they are also XL the German Shepherds, the Siberian Husky and the Dalmatians and none of them suffers the problem of overpopulation and abandonment of the Mastiffs. And not only is it a question of numbers, we should also review how we treat an animal as Iberian as the Spanish Mastiff. It is usually condemned to be an innocent vigilante of rural estates (his greatest aggressiveness is his cavernous, powerful bark) and in many of them a heavy stick is tied around his neck to avoid any temptation to escape.

As big as good-natured

According to the Affinity Foundation each refuge or kennel has a good number of them, however it is enough to invoke the name of the breed so that these animals disappear immediately from the possibilities that the hypothetical adopter is considering. Great strangers and prejudiced negatively, they are naturally large dogs, with an imposing presence, but at the same time they turn out to be faithful as few, endearing and some "excellent companions of his human family" This is what Jaime Terán, of Adopt a Mastiff, defends. "Together with the Galgo, the Mastiff is a dog that our society has condemned to silence and abuse," he laments.

"Used during the cattle grazing season, abandoned later in the field, survivors in deplorable conditions in industrial polygons and ships of custody, the Mastiff, unlike the Greyhound, does not enjoy any sympathy. Among other things because almost nobody has yet noticed the terrible drama that this animal suffers", Insists Terán.

And yes, just like we talk about couch Galgos, we could also talk about Sofa mastiffs. "Good natured and noble, only those who have had a minimum experience of living with one of them know that they are incredibly docile and adaptive animals" In addition, and unlike other more popular breeds, the Mastiff is not an animal that requires a high dose of exercise, thanks for the ride, and when they are puppies, of course the game, but in adulthood they prefer a quiet and peaceful environment to a long walk.

If you are thinking of adopting a Golden Retriever dog, Labrador or any other large breed, think of the idea of ​​going off on a tangent and giving an animal an opportunity that almost nobody gives it. And if what you fear is coexistence in a small environment like that of an apartment, you should know that these dogs they spend most of the day resting.

One of the first companions of man

By the way, there are many types of Mastiffs (Spanish, English, Neapolitan, Pyrenean, Tibetan), although the most common is the first one. You will also find it very often, crossed. It is not listed among the potentially dangerous breeds and its existence goes back to more than 4,000 years. In fact, it is known that it was one of the first dogs taken into account as a pet. How the thing has changed! He is defined, encyclopedically, as a meek, loyal, affectionate and ideal to be raised in an environment where there are children. Do not you think it anymore!

Read also: The sleeping routine of this Mastiff will make you laugh until you can not!